An Unfinished List (from putting words on your heart for DeeDee Rose), 1999

Ten drawings, hung in any formation

Anthony Meier Fine Arts is pleased to present the work of New York artist Jim Hodges. Hodges will show new works made of paper. Hodges is currently the artist in residence at CCAC's Capp Street Project and his video installation "Subway Music Box" will be on view there through May 6.

Hodges creates beautiful, often labor-intensive work including drawings, sculptures and installations from everyday materials. Using synthetic flowers, paper napkins, Pantone chips, mirrors and an array of other materials as his medium, Hodges transforms these objects so they reference such themes as loss and the fragility of life, memory and longing, or simply the idea that beauty can be found in the most ordinary of objects and circumstances.

In "List", a detail of which is pictured on the invitation, Hodges has made a series of ten word drawings each with a different word or set of words. The words are presented on a grid so that each letter is made of many different colored squares. Derived from a list that Hodges compiled relating to the relationship between friends and lovers, the words have no formal definition. When viewed, the piece functions as a poem, which cannot be read in a linear manner and instead has a subliminal affect. The relationship between the drawing and the viewer is dependent on the individual and how one reads it. This kind of interaction between the viewer and artist is of continual concern to Hodges who strives to make his work accessible as well as personal.

Born in 1957 in Spokane, Washington. Hodges has had solo shows at the Museum of Contemporary Art Chicago (1999), the Miami Art Museum (1999), and the Kemper Museum of Contemporary Art in Kansas City (1998). Hodges has also been included in the following group exhibitions: Regarding Beauty at the Hirshhorn Museum (1999), The American Century at the Whitney (1999), and Present Tense: Nine Artists in the Nineties at SFMOMA (1997). 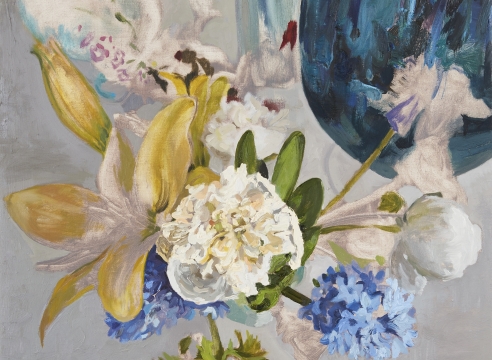