For Bay Area Blues, the form within consists of two colors – one blue and one foggy white – which are both repeated in opposing layout in the outer form. The effect: an infinite number of illuminated blue hues, interacting as the viewer moves throughout the gallery. Three maquettes accompany the large sculpture, offering a birds-eye view and study of light and hue.

Larry Bell lives and works in Taos, NM and Venice, CA. Bell attended the Chouinard Art Institute in Los Angeles, CA, from 1957 to 1959. Bell is a recipient of multiple recognitions, among them the Governor’s Award for Excellence and Achievement in the Arts, Santa Fe, NM (1990); the Guggenheim Fellowship (1970); and grants from the Copley Foundation (1962) and the National Endowment for the Arts (1975). 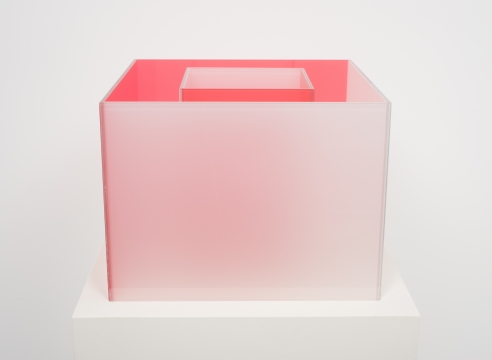