Anthony Meier Fine Arts is pleased to announce an exhibition of new works by San Francisco-based painter Richard Hoblock.  For his first solo exhibition at the gallery, Hoblock presents a group of abstract paintings that examine scale, color and excavation.

A body of works in varying tone and scale, each canvas is a study in layers constructed over a period of months; Hoblock’s process is one of removal as well as building up. A painting begins as a graphic, abstract layer – a painting unto itself, created only for sacrifice.  A topcoat is applied with a heavy hand, then swept and scraped away to reveal the lively underpainting beneath. The surface features the result of this excavation: strata pushed aside as archaeological residue.

The resulting effect is a suite of bold, organic forms escaping their topcoat blankets – thick surfaces appearing frenetically torn to expose the rich tones undercover. Each gesture is planned and informed by the artist’s recollection of the painting’s initial existence, a roadmap referenced from memory. 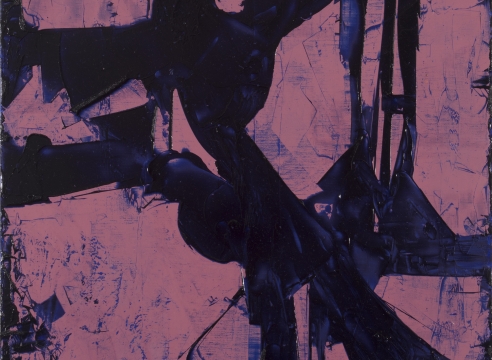