Anthony Meier Fine Arts is pleased to present an exhibition of new work by New York based artist Teresita Fernández. Exhibiting at the gallery for the first time, Fernández is showing new sculptural and site-specific pieces.

With an ongoing series, referred to overall as Nocturnal, Fernández continues to explore graphite as a medium and a subject matter. As reliefs on wood panels treated with graphite, the works burst into the three-dimensional realm with fragments of the raw material combined with a burnished, almost molten layer of polished graphite adhered to the surface. Inspired by the cumulative history of landscape representation, Fernández traces this material to Borrowdale, England, where it was first discovered and mined in the 1500s. The Nocturnal series touches upon both the land art of Smithson’s pours as well as the deliberately romantic framing of historic landscape painting. The works function simultaneously as captured views of oddly familiar places and ultimate abstractions. From afar they suggest dark, monochrome minimalist paintings, only to slowly catch the light and reveal their ephemeral, recognizable scenes.

In the site-specific work, Sfumato (Horizon), Fernández marks the side gallery with a “drawing” of a level horizon line made of dimensional graphite fragments. Each graphite rock hovers above a gestural drawn mark, giving the illusion that each piece is hovering, suspended within its own drawn shadow.

Taken together, Nocturnal and Sfumato are as much about place and landscape as they are about drawing and materiality. They seem to occupy the shallow, undefined space between the act of drawing and the finished mark; between recognizable scene and abstracted field; and between the two- and three-dimensional.

Another site-specific work, Double Dissolve, consists of hundreds of tiny, silvered glass cubes installed across from the gallery’s front windows. The city’s atmospheric conditions become absorbed in the surface of the work as it returns a mirrored, fragmented, and dispersed portrait of the changing light.

Fernández effortlessly distills material to its essence while pushing it to the extremes of its physical and conceptual capabilities.

Fernández’s work is included in the permanent collections of the San Francisco Museum of Modern Art, the Miami Art Museum, the Walker Art Center in Minneapolis, the Sammlung Goetz in Munich, and the Albright-Knox Gallery in Buffalo, among others. Many public site-specific commissions by the artist are also on view in sites that include the Louis Vuitton Maison in San Francisco, the Seattle Art Museum’s Olympic Sculpture Park, The Blanton Museum of Art in Austin, and the new Dallas Cowboys Stadium. 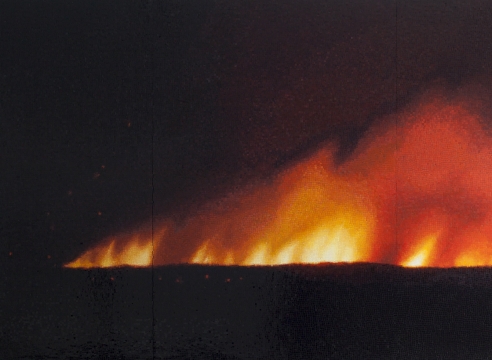